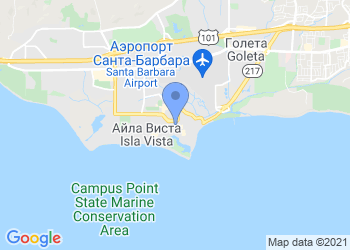 Palm-framed vistas of the blue Pacific and the golden Santa Ynez Mountains. The scent of eucalyptus mixed with the saltwater breeze. Breathtaking natural beauty combined with enormous intellectual vitality. This is the University of California, Santa Barbara, and there is no other campus quite like it, anywhere. Here on the edge of the Pacific, in a setting removed from urban pressures and distractions but vibrant with cultural and academic activity, many of the country's most promising students join a community of scholars whose accomplishments are internationally recognized and whose skills as teachers of undergraduates are evident each day in laboratories and classrooms. In the humanities and the arts as well as in engineering and the sciences, UCSB introduces students to novel ways of thinking, learning, and conducting research. The Highest Quality Pioneering research is a critical component of the highest quality education. UCSB's 1,000-member faculty includes five Nobel Prize winners and scores of elected members or fellows of the National Academy of Sciences, the National Academy of Engineering, the American Academy of Arts and Sciences, and the American Association for the Advancement of Science. The campus is one of only 62 research-intensive institutions elected to membership in the prestigious Association...

In just six decades as a campus of the University of California, UC Santa Barbara has become internationally recognized as a leading center for teaching and research, distinguished by its interdisciplinary programs and a commitment to innovation. Once a small, independent teachers college, UCSB today is an integral part of the ten-campus University of California system. With an enrollment of approximately 21,500 students, some 18,500 of them undergraduates, and a faculty of nearly 1,100, UCSB is a campus of cutting-edge intellectual activity that spans the academic spectrum. UC Santa Barbara offers more than 200 majors, degrees, and credentials through three colleges (Creative Studies, Engineering, and Letters and Science) and two professional schools (the Bren School of Environmental Science and Management and the Gevirtz Graduate School of Education). UCSB has a tradition of emphasizing both undergraduate and graduate programs in a friendly and collegial environment in which students, staff, and faculty members from diverse backgrounds and perspectives explore and learn together. In 1995, UCSB was elected to the prestigious 62-member Association of American Universities, placing it in the top 2 percent of all colleges and universities in North America. The campus is now home to twelve national research centers, nine of them supported by the National Science Foundation. The quality and stature of undergraduate programs are highly ranked. U.S. News & World Report includes UC Santa Barbara among the top 50 National universities in the country and ranks it number ten among all public institutions. Twice in recent years, UCSB was named one of the “hottest colleges” in the country by the popular Newsweek guide to colleges. “If there’s a more beautiful campus than this one at the edge of the Pacific, we haven’t seen it,” said Newsweek. The faculty now includes six winners of Nobel Prizes (in chemistry, economics, and physics). All were awarded since 1998. UCSB's faculty also includes scores of elected members or fellows of the American Academy of Arts and Sciences, the National Academy of Sciences, the National Academy of Engineering, and the American Association for the Advancement of Science, as well as winners of the National Humanities Medal, National Medal of Science, Fields Medal, Millennium Technology Prize, and dozens of Fulbright and Guggenheim fellowships. Located on the coast approximately 100 miles northwest of Los Angeles, the 1,055-acre campus is bordered by the Pacific Ocean and the Santa Ynez Mountains. The campus has 7.8 million square feet of buildings occupying a picturesque palm- and eucalyptus-lined promontory overlooking the Pacific. The expanding physical plant includes new buildings for engineering, humanities, social sciences, sciences, and recreation. The University houses more than 8,000 students in residence halls and apartments located on the Main and Storke campuses and in University-owned facilities in Isla Vista; most of the rest live in the adjacent bustling student community of Isla Vista. Cultural and recreational opportunities abound in the nearby cities of Goleta and Santa Barbara, which together form a vibrant and welcoming community with a deep concern for history, the arts, and the environment. For additional information, please visit UCSB’s website at www.ucsb.edu
Подробнее