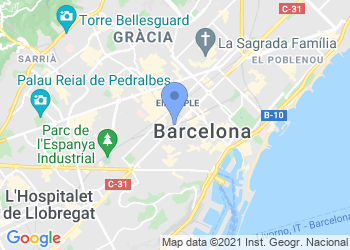 The University of Barcelona (UB) was founded in 1450. The present central buiding was inaugurated in 1871. Today the university has four campuses, in different parts of the city. The UB is the oldest and largest university compared to the six universities in Barcelona and the ten universities in Catalonia. There are 76,000 students -- over half of Catalonia's total student population -- studying here. The UB has the second largest student population in Spain. UB students have access to an extensive range of services. Ten thousand bachelor?s degrees and 450 PhD's are awarded each year. The university has 4,152 faculty members and 1,828 other personnel. It manages around 2,073 million pesetas in research and technology related activities. The UB is divided into five divisions that are made up of related areas of teaching; twenty university schools; 97 departments; and 78 degree courses. Postgraduate and graduate school programs are also offered, as well as a large number of continuing education courses. Based on numbers of books, the UB library is the second largest in Spain after the National Library in Madrid. More than two-million books and about 36,000 journals are available in 17 sections in the schools, campuses and about...

Founded in 1450, the University of Barcelona (UB) comprises six campuses located within the inner city, and is therefore Barcelona's principal university. In its nineteen centres, the UB offers a total of 65 bachelor’s degrees, 146 university master’s degrees, 71 doctoral programs and over 1,000 postgraduate and lifelong learning courses. Over 90,000 students are studying in face-to-face and distance learning modes and every year more than 7,000 students are awarded bachelor’s degrees and more than 500 doctoral theses are submitted. The UB’s budget totals at 379,341 euros and it has 106 departments, 4,995 teaching and research staff members and 2,348 administrative and services staff members. In research, the UB works on the frontiers of such disciplines as biomedicine and biotechnology, but is also active in such fields as experimental sciences, social sciences, the humanities, and the fine arts. The income from research and technology transfer amounts to 108,680 euros and the number of scientific publications is 3,679. The UB also stands as the top Spanish university in the results of the chief international institutions that publish ranking lists on centres of higher education. Finally, the UB plays host to more than 8,700 international students of 94 different nationalities.

Since it was founded in 1450, the University of Barcelona has become a benchmark institution for teaching, scientific research and knowledge creation in Spain and abroad. Its dynamic, critical and constructive qualities have always been placed at the service of the community and the country, where it strives to uphold the principles of freedom and equality and pursue its commitment to progress. In its eighteen centres, located within the inner city, the UB offers a wide range of subjects to more than sixty-four thousand undergraduate and postgraduate students of 120 different nationalities studying on its six campuses. In research, the UB works in innovative disciplines such as biomedicine and biotechnology but is also active in more traditional fields including experimental sciences, social sciences, health, the humanities and fine arts, and its researchers publish in the most prestigious international journals. The University of Barcelona is also actively involved in the work of the League of European Research Universities (LERU) and has fully consolidated the actions of its two campuses of international excellence, the HUBc health sciences campus and the BKC knowledge campus, the latter in conjunction with the Polytechnic University of Catalonia. Alongside teaching and research, areas such as internationalization, innovation, social and environmental responsibility, good governance and gender equality complete the portfolio of activities and initiatives carried out by the UB
Подробнее