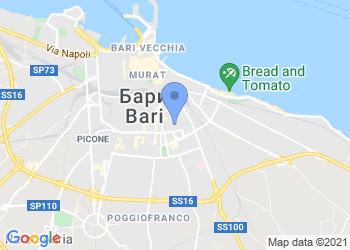 Application process and the cost of tuition. POLIBA has affordable bachelor’s programs that cost less than 1,000 USD/year. More information could be found on the official website of the university http://www.poliba.it.

The composition of the university. Technical University of Bari is a big educational institution, attended by more than 51 thousand students. Foreign applicants are not excluded from the admission process. POLIBA has around 1% of foreign students. The education is provided by more than 1800 teachers and professors. The university has social media profiles Linkedin, where you can learn more about it.

Infrastructure of POLIBA. There is a library on the campus. Furthermore the university has dedicated facilities for sports, physical education and sporting events.

The origin of the University of Bari dates back to 1581, when the "Collegio della Compagnia del Gesù" started the University degree in Philosophy and Human Sciences. At the beginning of the 18th Century the new "illuministic ideology" pushed forward the needs in the area of physical and natural sciences: as a consequence, curricula in Medicine, Law, Chimestry, and Botanics were activated in Altamura. In 1772 the Royal College moved the Universiy activitiy from Atamura to Bari, including the very outstanding curricula in Legislation and Agriculture. At the beginning of the 19th Century, New University Schools (Licei) were activated by G. Murat in the Apulia Region. Some of these Schools were closed in 1861/2, after the creation of the Italy Nation , other Schools were moved to Naples. At the same time, in order to continue the University activity, it was taken the decision to build the "Atheneum" in Bari. The construction started on March 14, 1868. The building was ready on December 28, 1889. The University of Bari was instituted in October 9, 1924, on the foundations of the ancient Graduate Schools of Pharmacy and Notaryship activated immediately after the Unification of Italy as substitutes of the former "Reale...