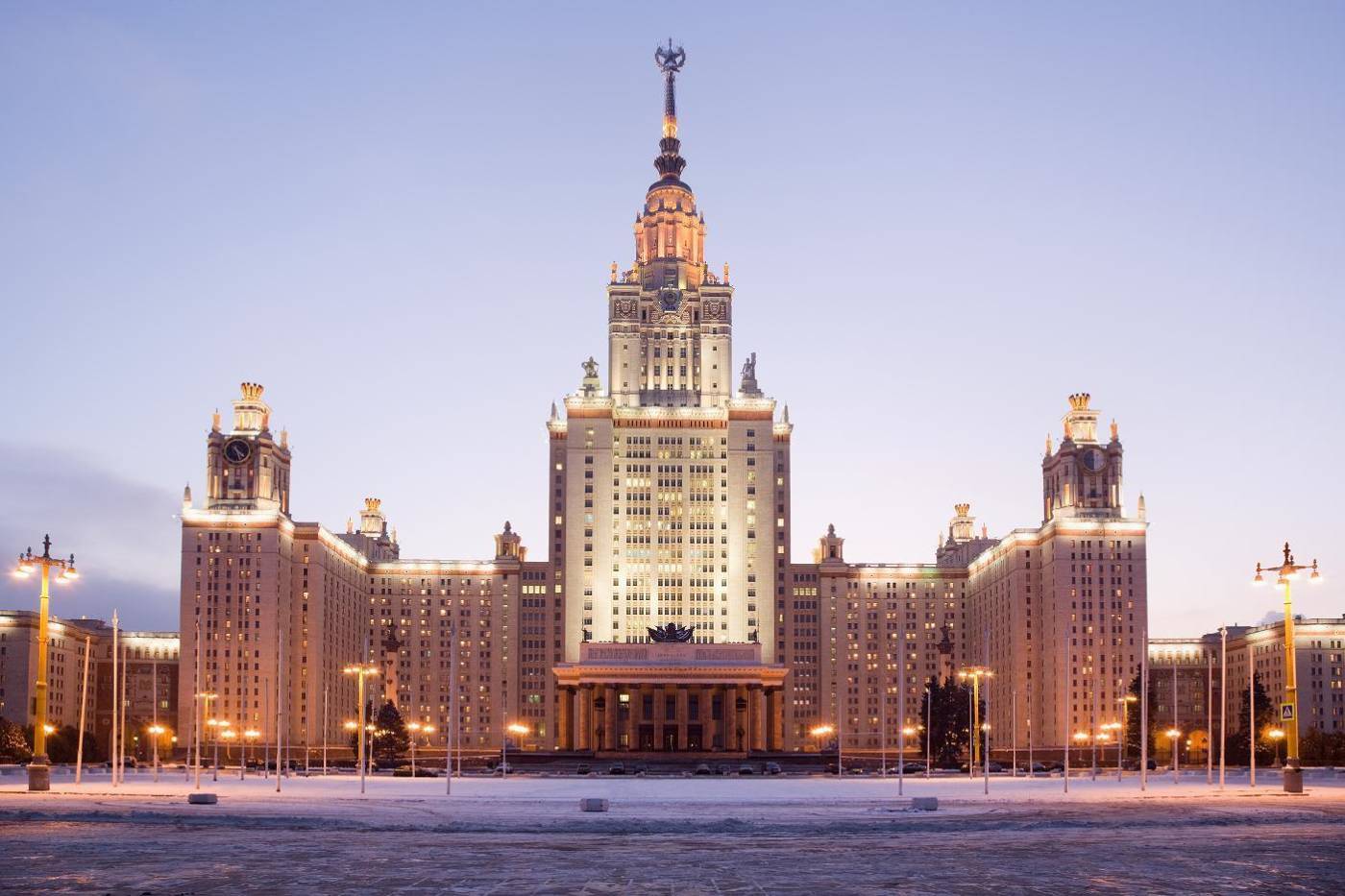 Lomonosov Moscow State University (MSU) is the oldest classical university in Russia, founded over 260 years ago. A large research and educational center ranks first in the ranking of Russian universities[0]. The main university building on the Sparrow Hills is an iconic landmark of Moscow.

The opening of the first university in Russia was possible thanks to the active work of an outstanding scientist-academician Mikhail Lomonosov (1711-1765), who repeatedly raised the question of the need for training scientific personnel. On January 25, 1755, Empress Elizaveta Petrovna signed a decree establishing the university.

The initial fundamental training of students took place at the Faculty of Philosophy. For further specialization, it was possible to continue studying at the same faculty or switch to medical or legal. Students and teachers were admitted to Moscow University, regardless of social status. Some lectures became open to public attendance. In 1756, the first public library was opened.

During the war of 1812, university buildings were severely damaged by fires. By the joint efforts of teachers and students, in September 1813, classes were resumed at the university, and by the 30s of the 19th century the number of students had reached 500 people.

After the abolition of serfdom, in connection with the development of industry, agriculture and trade, the importance of university education has grown. Since 1863, the number of academic disciplines and teachers has expanded, more time has been devoted to practical exercises and seminars.

As a result of the 1917 revolution, two significant changes took place at the university: the tuition fees were canceled, but about half of the teachers and students left the university for political reasons. Despite the difficulties, by the beginning of World War II, the university had defended its first dissertations, the number of students grew to 5000, more than 30 teachers became members of the Academy of Sciences. In January 1940, the university was named after M.V. Lomonosov.

Moscow University spent the war years in evacuation. In 1953, Moscow State University opened its doors in a new complex on the Sparrow Hills. The significantly increased budget gave an impetus to the opening of specialized laboratories and research centers, and allowed to improve the facilities. The university has opened faculties of psychology, oriental studies, computational mathematics. By 2000 the number of students has grown to 31000, and the number of faculties has reached 34. Thanks to close cooperation with foreign partners, Moscow State University has become an international scientific and educational center.

The structure of the university

Moscow State University has 40 faculties where bachelor’s, master’s and graduate students are trained in 95 specialties. The university includes 15 research centers, 13 institutes and 6 branches. AESC MSU boarding school opened under the wing of MSU, in which students gain in-depth knowledge in the fields of physics, mathematics, chemistry, biology and computer science. The structure of Moscow State University also includes:

Students and post-graduate students of the university have the opportunity to receive material support from state funding programs. Actual information on grants and scholarships for scientific achievements of young scientists is published on the website of Moscow State University. The maximum grant size reaches 82,024 USD.

Higher state academic scholarshipStudents studying under an agreement or within a quotaSignificant academic, research, social, cultural or sports achievementsDeclared each semester

The advantages of studying at MSU

International students can apply for admission by quota or by paying for the tuition. Applicants must contact the foreign department of the faculty where they plan to study and fill out an application form. After this, it is necessary to submit the following list of documents to the Moscow admission committee in person:

Entrance tests for foreign applicants are held in the form of face-to-face interviews in priority subjects. The list of programs with corresponding subjects can be found on the official website. For admission to state-funded seats under the quota, applicants must pass the entrance examinations on the same terms as citizens. The competitive selection period is from June 15 to July 10bachelor's, specialty or to July 20master's. Please check with the MSU website for the acute dates.

As all Bachelor’s and most Master’s programs of the University are taught in Russian, the MSU Institute of the Russian Language and Culture offers a range of special preparatory programs for international students:

In addition, there is a short-term winter school for all foreign citizens over 16 years old.

Moscow State University has more than 700 partnership agreements with universities from 64 countries[7]. Academic mobility programs are one of the priority areas. Annually the University accepts about 10000 foreign and graduate students for training and internships. Students and teachers of Moscow State University participate in academic exchange under the European Union Erasmus + program. The goal of this joint project is to support cooperation in the field of education and vocational training. Students get the opportunity to study or take part in internships at one of the partner universities in Europe, MSU teachers can undergo advanced training or engage in teaching activities.

Moscow State University initiative helped to create the Eurasian Association of Universities, that is the large organization, which includes about 140 educational institutions of the CIS region[8].

Annually about 500 MSU students are sent to take part in internships at foreign partner universities. The training lasts for 1 or 2 semesters. To enroll in the program, students must submit an application and pass an interview with the commission in Russian and a foreign language (in which they study at the chosen university). The commission determines the winner(s) of the competition and decides on sending the student to an internship.

Education at a foreign university takes place at the expense of the host country. The student assumes all other expenses (flight, visa, accommodation, meals, insurance, etc.).

Students can take part in the competition for bachelor’s/specialty programs of the 3rd, 4th year of full-time education and students of the 4th, 5th year of the evening department. Master’s students can apply after the 1st year.

Students who have been trained for 1 semester must pass the MSU examinations upon return and continue their studies. If the exchange program has lasted a whole year, the student is not transferred to the next course, but continues to study with a junior course. After returning, students must provide the faculty with a document on the successful completion of the program and an internship report.

Student council. A self-government body in which a team of leaders with the support of the university administration decides on educational, domestic and cultural issues. For example, the organization of bicycle parking, the introduction of unified payment cards for services on campus, the approval of the calendar of cultural and sports events at Moscow State University.

Creative groups. On the basis of the university there are dance, theater and vocal studios. The Academic Choir of Moscow State University is the oldest folk choir in Russia, in which students, graduates and university teachers participate. Lectures, creative meetings and presentations of new books are held in the classroom of the Literary Studio "Ray". Dance mastery is taught at Grazia-MSU and Saraswati.

Sports organizations. On the Klyazma reservoir there is a Yacht Club, which hosts the classes of the MSU sailing club. To participate it is not necessary to have the experience of a yachtsman. Club coaches will teach the tricks of navigation, provide a yacht and prepare for the competition. For students and graduate students classes are free. MSU students can choose another sports area: the university has at least 40 clubs.

Tatyana's Day. January 25 is a special day in the life of Moscow State University. Every year, on the founding day of the university, festive events are held, the main of which is a concert organized by members of student groups[9].

Infrastructure of the University

The main building of Moscow State University is one of the most recognizable sights of Moscow. It is located in a picturesque place on the Sparrow Hills, which offers a panoramic view of the city. The observation deck is located on the 32nd floor of a 240 meter building, built in the 1950s. University faculties are located in the central regions of Moscow. In total, the university has about 600 buildings at its disposal.

Moscow State University library is the oldest public library in Russia and one of the largest: the collection contains more than 10 million items. 50 departments of the scientific library are located in 17 buildings of the university[10].

Dormitories Moscow State University has 7 campuses at its disposal. The infrastructure of the complexes includes apartments for teachers, block-type dormitories, shops, recreation areas and gyms. All towns have Internet access and medical units. The cost of living in rooms for 2-3 people is 2 USD/month for state-funded and international students, 1 USD/month – for those studying at the preparatory programs. Fee-paying students pay between 9 USD and 195 USD per month depending on the dorm and living conditions[11]. It takes from 15 minutes to half an hour to get to the university.

Pros. Positive reviews often mention good fundamental training in the natural sciences, the relevance of graduates after graduation, and the convenient location of university buildings and campuses.

Cons. Students note that the curriculum of courses is rarely updated, as a result, students receive outdated knowledge. At a university, lectures are often rescheduled or canceled without warning. In almost all reviews, poor conditions appear in buildings (with the exception of the main building) and dormitories, for example, lack of repair, cockroaches, broken glass. 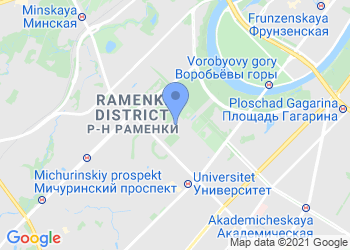