The University of Georgia

The University of Georgia or Universitas Georgiae (UGA) - public higher education institution in United States. UGA was founded in 1785. The university has an urban campus in Athens.

University ranking. The University of Georgia never leaves the national rankings of the top universities of United States. The University of Georgia is among the oldest and the most prestigious universities of United States. The university has its well deserved place among the top 5% of the world’s best universities. It is famous for: «Arts and Humanities», «Life Sciences and Medicine», «Social Sciences and Management», «Chemistry», «Economics & Business». UGA is among the best in terms of education quality, proudly standing in the top 400 in the international rankings according to this criterion.

Application process and the cost of tuition. The admission committee requests both examination results and the document on previous academic performance. The chances of successful admission are very high as 60 percent of applicants get enrolled but that number may vary depending on the faculty. Academic year of the university consists of two semesters. A year of bachelor studies will cost you around 9,000 USD. Doing your master’s studies at UGA is not cheap - a year of studies will cost you 9,000 USD. In addition, part of the cost can be covered by university scholarships. A wide range of online courses is available for the students of UGA. The official website of the university (http://www.uga.edu) can offer more accurate pricing information depending on the chocen program.

The composition of the university. The University of Georgia is a big educational institution, attended by more than 33 thousand students. Foreign citizens can submit their applications along with the local students. Foreigners make about 7% of all students. To ensure that the quality of education stays high the university has an academic staff consisting of more than 2400 specialists. The university offers international student exchange programs, made possible by the vast network of partner educational institutions and companies. The university social media pages cover student life, recent events and more: Twitter, Youtube, Facebook, Linkedin.

Infrastructure of UGA. The students have access to the university’s library. Students can apply for a dormitory. The university belongs to the number of groups and associations like the University System of Georgia, as well as the Association of Public and Land-Grant Universities (APLU) and Oak Ridge Associated Universities (ORAU), Sport affiliations and memberships: National Collegiate Athletic Association (NCAA).
UniPage Services Admissions assistance
Location on map 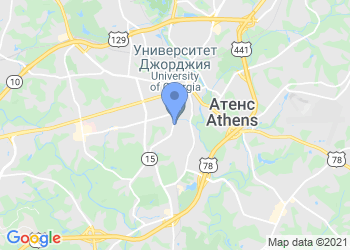 Description of The University of Georgia

Established by a charter adopted by the Georgia Legislature in 1785, the University of Georgia is the first university in America to be chartered by a state government. The principles embodied in its charter 'that education is the foundation of a democratic society and a right of all citizens, and that providing education is the responsibility of government' helped give rise to the American system of public higher education. UGA's picturesque 762-acre campus, in the Appalachian foothills about 70 miles northeast of Atlanta, is adorned with many 19th century buildings including Old College (1806), and the University Chapel (1832). North Campus, featuring quads with century-old trees and scenic green spaces, is listed on the National Register of Historic Places. Other notable campus features include bike paths, quiet gardens, one of the nation's largest student recreation/fitness centers and one of the oldest cemeteries on an American university campus (dating to 1814). UGA is Georgia's most popular college (more than 22,500 applications for the 2015 freshman class) and has one of the nation's largest and oldest Honors Programs, attracting superior students from across the country. UGA is a national leader among public universities in the number of major scholarships earned by its students. UGA students have earned 23 Rhodes Scholarships, 49 Goldwater Scholarships, 20 Truman Scholarships, 13 Udall Scholarships, 32 Boren Scholarships and 6 Marshall Scholarships. Since 2001, 111 UGA students have earned Fulbright Scholarships. The student satisfaction rate is high with 94 percent of freshmen returning as sophomores, and Georgia's HOPE Scholarship keeps in-state student costs among the lowest at major public universities. Long a research leader in such fields as agriculture, biology and biotechnology, UGA is rapidly building strength in human and animal health and biomedicine with its College of Public Health, Biomedical and Health Sciences Institute and Cancer Center. A physician education program developed jointly by UGA and Georgia Regents University began in 2010 and will help offset a severe shortage of doctors in Georgia. A 56-acre Health Sciences Campus houses the Medical Partnership, College of Public Health and other health-related programs. The Eugene P. Odum School of Ecology, opened in 2007, is the world's first stand-alone school devoted to ecological studies and research. UGA's Grady College of Journalism and Mass Communication is home to the prestigious Peabody Awards, the world's oldest prize in electronic media. In addition, the Peabody Archives in the Richard B. Russell Special Collections Libraries contain some of the best radio, television and cable programs ever produced. UGA is home of Georgia's official state botanical garden, state art museum and state museum of natural history, as well as the Georgia Writers Hall of Fame
Universities related to The University of Georgia
Universities in this city
Information is exploratory. For accurate information, refer to the official website of the school.
Advanced search
Showing 1-1 of 1 item.
Universities in this country
Information is exploratory. For accurate information, refer to the official website of the school.
Advanced search
Showing 1-5 of 3,493 items.