Christian Albrecht University of Kiel or Christian-Albrechts-Universität zu Kiel (CAU) - public higher education institution in Germany. CAU began its activity in 1665. It has an urban campus located in Kiel.

Application process and the cost of tuition. The academic year is traditionally consists of semesters. Studying bachelor’s at CAU is relatively inexpensive - only 1,000 USD per year. Those who wish to continue their studies at a master’s level should expect to spend at least 1,000 USD per year. It is important to check for current tuition fees on (http://www.uni-kiel.de) with the desirable faculty in mind.

The composition of the university. Christian Albrecht University of Kiel is among the largest universities that educates more then 24 thousand students. Foreign applicants are not excluded from the admission process. At CAU there are about 7% of foreigners. The teaching staff consists of more than 2500 specialists. The university is an active participant of international programs aimed at academic exchange of students between the educational institutions. University’s social media profiles can give you more information about the students and current events: Linkedin.

Infrastructure of CAU. The library is available to all of the students. The university is a part of the European University Association (EUA).
UniPage Services Admissions assistance
Location on map 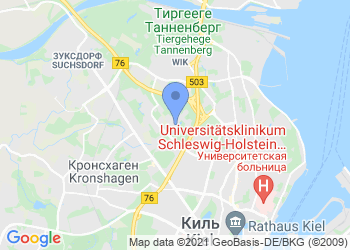 When Herzog Christian-Albrecht von Holstein-Gottorf decided to found a university in 1665, the devastating Thirty Years' War was not long over. The university to which the duke gave his name was the a response to his country's need for well-educated young men able to serve the state. 140 students enrolled in the faculties of Theology, Law, Medicine and Philosophy initially established. Just as the body of students attending the CAU has increased to over 20,000, so the range of subjects offered has long been extended to include economics, the natural sciences, agriculture, engineering, and science of education. In the former workplace of Max Planck and Heinrich Hertz, a teaching staff of 600 passes on its knowledge to students from Germany and more than a hundred other countries. Kiel is well aware of its special role as the only university in Schleswig-Holstein offering a spectrum of subjects sufficiently wide to serve the requirements of school-leavers in the region seeking university education within their own federal state. At the same time, its clear academic profile and areas of specialization reflect a determination to accept the challenge of national and international competition among universities.