National Cheng Kung University or 國立成功大學 (NCKU) - public higher education institution in Taiwan. NCKU was founded in 1931. The university has an urban campus in Tainan.

University ranking. National Cheng Kung University is one of the top educational institutions in Taiwan that never leaves the country’s top 5 places to study. National Cheng Kung University is one of the most famous and prestigious universities in the world. Strong suits of the university are: «Arts and Humanities», «Engineering and Technology», «Life Sciences and Medicine», «Natural Science», «Social Sciences and Management», «Computer Science». The university is considered to be among the best in the quality of education and ranks in the top 300 in that criterion.

Application process and the cost of tuition. Like in many universities of Taiwan the academic year consists of two semesters. 1,000 USD/год. In order to obtain a master’s degree the student must spend about 1,000 USD per year. Here you can choose from a wide array of full-time programs, however the students are not limited to them as the university also offers online courses and programs. Before starting to plan your education at NCKU read more information on the official website https://web.ncku.edu.tw/index.php?Lang=zh-tw.

The composition of the university. National Cheng Kung University is a big educational institution, attended by more than 21 thousand students. The admission committee accepts the applications from foreign citizens. Foreigners make about 10% of all students. The education is provided by more than 2000 teachers and professors. The university participates in a variety of international exchange programs between students and academic staff.

Infrastructure of NCKU. The students have access to the university’s library.
Despite the ongoing pandemic and current political agenda, admission to foreign universities will continue under normal conditions.
Free consultation UniPage services
Location on map 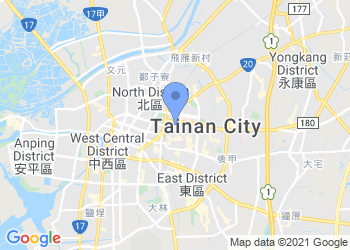 School established as Tainan Technical College, located on the present Cheng-Kung Campus, total area of 18.3 hectares NCKU is located in Tainan City, Taiwan Province, the Republic of China. It is situated accross from the Tainan Railway Station, offering convenient transportation. The total area of the school is 172.629294 hectares, including the Cheng-Kung, Sheng-Li, Kuang-Fu, Chien-Kuo, Tzu-Chiang, Ching-Yeh, Li-Hsing, and Kuei-Jen Campuses, the An-Nan Campus and some areas designated for dormitory use. It is one of the most spacious and beautiful university campuses in this country. The Center for General Education was established in 1996. Its major obligation is not specifically aimed to prepare students for jobs, but to equip them with the essentials for living a full and satisfying life as citizens of a free society. These primary goals are: 1. Providing the student with opportunities to develop the knowledge, attitudes, understandings and skills necessary for responsible citizenship in a democratic society. 2. Helping the student understand the social, political and economic problems of society on local, national , and international levels. 3. Fostering an understanding and appreciation of the scientific method and the importance of science in our technological world. 4. Cultivating an integrated mind and the ability...

National Cheng Kung University is situated in Tainan City, a historical city with rich cultural heritage and a new metropolitan center for science and technology. The total area of the campus is 172.629294 hectares, including the Cheng-Kung, Sheng-Li, Kuang-Fu, Chien-Kuo, Tzu-Chiang, Ching-Yeh, Li-Hsing, and Kuei-Jen Campuses, the An-Nan Campus and some areas designated for dormitory use. In keeping with this tradition, we seek to be pioneers in the modern sciences and technology. NCKU campuses are all closely interlinked, enabling the nine colleges to share the plentiful resources. In 2006, Taiwans Ministry of Education put forth a plan to Develop Top-tier Universities and Elite Research Centers. N.C.K.U. was selected as one of the awardees and began a rapid process of upgrading the university in areas of research, teaching and extension services under the leadership of the former President of N.C.K.U. Professor Chiang Kao. In February 2007, a new leadership team led by the new N.C.K.U. President, Academician Dr. Michael M.C. Lai came into being. Indeed, with Academician Lai at the helm, vigorous new guidelines to move the university towards world-class status were established. To elevate N.C.K.U. to the next plateau of excellence, President Lai succinctly brought to the University his clear...

National Cheng Kung University (NCKU), located in Taiwan’s ancient and cultural capital of Tainan, is one of Taiwan’s top research intensive universities and a leader in promoting industry-academia cooperation. With more than 1,200 faculty members, 22,000 students and 140,000 alumni worldwide, the university is best known for its science, engineering, medicine, management, planning and design. Since its establishment in 1931, NCKU has transformed from an engineering college into a comprehensive university comprised of 9 colleges, including Liberal Arts, Sciences, Engineering, Electrical Engineering and Computer Science, Planning & Design, Management, Social Sciences, Medicine, and Bioscience & Biotechnology, on 11 campuses. Occupying a total of 187 hectares of land, the 9 colleges along with its affiliated hospital are conveniently located in the downtown area of eastern Tainan. NCKU currently offers 42 undergraduate programs, (excluding Program of Bachelor’s Degree), 74 master’s degree programs, 53 doctoral programs and 17 master’s degree programs for working professionals. As a top-notch national university in Taiwan, NCKU has played a vital and critical role in creating Taiwan’s economic miracle by helping Taiwan to transform from an agriculture-based society to an industrialized economy during the 1960s and 1970s. Many excellent engineers devoted to manufacturing, construction and social services are cultivated in this oldest engineering university nationwide. Since the establishment of the Research and Service Headquarters in 1996, a total of more than 60 research centers, including the Research Center for Energy Technology and Strategy, Innovation Center for Advanced Medical Device Technology Center, Infectious Disease and Signaling Research Center and Advanced Optoelectronics Technology Center, have been founded to support teaching and research environment and promote cooperation among industry and academia. The 4 elite research centers are recognized by the Ministry of Education for their outstanding performance. Over the years, faculty and students have achieved great success in academia and research, which are reflected in the ranking of world university rankings and also in the number of publications in international journals. NCKU has ranked the 256th in 2010 Academic Ranking of World Universities announced by Shanghai Jiaotong University, the 80th in 2011 Webometrics Ranking of World Universities published by Center for Scientific Information and Documentation, Spain, only second to that of National Taiwan University, University of Tokyo and Kyoto University in the Asian region, and the 32nd among Asian universities in 2011 QS World University Ranking. In addition, according to the ESI database, NCKU has published 18,333 papers in the last ten years and has respectively ranked the 14th and the 26th in the list of world top 100 universities respectively in the engineering and materials science fields. Meanwhile, the 2010 survey of worldwide university scientific papers by Higher Education Evaluation and Accreditation Council of Taiwan has found that NCKU ranks the 19th in the world and No.1 in Taiwan in the field of engineering. Inspired and enlightened by the University motto: “Discover the truth, devoted to knowledge,” NCKU students have been well-educated to become the most favored college graduates by local industries in Taiwan. Annual surveys conducted by prestigious Taiwanese magazines such as Common Wealth, Global Views and Cheers have ranked NCKU graduates as “industry favorites” each year since 1993. Notably, more than 100 of the NCKU graduates have become university presidents, and about 147,000 graduates have found gainfully employment in all walks of life around the world. NCKU has also achieved remarkable success in globalization. Not only has an English-speaking environment been built to attract hundreds of international students, but substantial academic ties have also been established with many world-class universities and institutes. NCKU currently has 605 international students, compared to 272 in 2006, which is a growth rate of more than 100%. If the 659 overseas Chinese students are taken into account, the total number of international students is 1,264, representing 6% of the total student population. As of 2010, a total of 445 international students received their degrees from NCKU with 83 bachelors, 350 masters and 12 doctoral degrees. The number of international scholars visiting the University has jumped from 644 to 1,169 and the number of international cooperation projects signed by the University has risen from 44 to 65. In addition to its global ties, NCKU remains supportive of its home in Southern Taiwan. The relations among NCKU, the Southern Taiwan Science Park and the Kaohsiung Science Park are comparable to those among Stanford University, University of California, Berkeley, and the Silicon Valley. “The University educates future leaders with humanistic and professional grounding, creativity, global vision and social consciousness while promotes interdisciplinary research to benefit our society and mankind.” To advance National Cheng Kung University for a world-class top university, President Hwung is determined to establish a friendly campus environment for better interdisciplinary teaching and research and industry-academia cooperation and to bring about substantial international exchanges. With its research strengths in engineering medicine, as well as notable accomplishments of the University’s 4 elite research centers, the University intends to mobilize and integrate research capacities from partner universities of the T4 Alliance and from universities across the country in order to boost both academic and industrial competitiveness and elevate its international status to world-class level in the following 5 years