University of Genoa or Università degli Studi di Genova (UniGe) - public higher education institution in Italy. UniGe was founded in 1471. The main building is in Genoa.

Application process and the cost of tuition. Studying bachelor’s at UniGe is relatively inexpensive - only 1,000 USD per year. A year of master’s studies will cost you 1,000 USD. When planning your education, please, consult the official website of the university http://www.unige.it.

The composition of the university. University of Genoa is among the largest universities that educates more then 35 thousand students. Foreign applicants are not excluded from the admission process. The ratio of foreign students at UniGe is 7% of all students. The academic staff includes more than 2200 teachers and professors. UniGe has international student exchange programs between partner universities. More information regarding the life of the university can be found on its social media pages:Twitter, Linkedin.

Infrastructure of UniGe. The university has its own library. University of Genoa belongs to the «European University Association (EUA)».
Free consultation UniPage services
Location on map 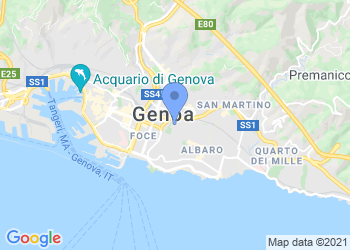 Already in the 13th century in Genoa there were Colleges, which gathered together people sharing the same field of knowledge. These Colleges were ruled by Statutes, which established a compulsory entrance examination for each candidate, to be taken in the presence of the members of the College. This was the first organized form of higher education in Genoa: the setting up of Colleges, which conferred degrees in Law, Theology, Medicine and Arts. There is no exact date for the foundation of the College of Law, but it certainly already existed before 1307, since in that year the Commanders of the local militia sanctioned that every member of the College should be exempted from all taxes and duties. Similarly, we do not have any exact documentation about the foundation of the College of Medicine, but it was probably contemporary to that of the College of Law, and was certainly established before 1353, when a tax exemption was decreed for both Colleges. The College of Medicine also included courses in Philosophy and the Arts, as well as Natural Sciences, whose knowledge was considered to be an integral part of Medicine. The actual promulgation of a Statute of the College of Medicine by...

Description of University of Genoa

ACCESS THE FUTURE The University of Genoa ( UNIGE ) is one of the most ancient of the European large universities; with about 280 educational paths distributed in the headquarters in Genoa and the learning centres of Imperia, Savona and La Spezia, it comes up to the community as a well-established reality throughout the region. Located at the heart of a superb city, offering splendors of its medieval and baroque heritage and site of the largest and most productive harbour in Europe, the University of Genoa is one of the most renowned multidisciplinary public universities in Italy, with peaks of excellence in several scientific and technological domains. The University of Genoa is a landmark in the achievement of tools to consciously deal with the challenges of the present and the future. FACULTY More than 1,300 faculty members distributed over five Schools: • Natural Sciences • Medical Sciences • Engineering • Social Sciences • Humanities STUDENT ENROLLMENT More than 30,000 students at both undergraduate and graduate levels. LIBRARIES The University libraries and the City Library System of Genoa have merged their services to create a single Integrated Library System. The broad array of services offered by the University libraries include both traditional text consultation and innovative, high tech services. TEACHING • With its 126 Degrees, more than 55 Postgraduate Schools, 26 Masters and 27 Ph.Ds, UNIGE provides a truly multi-disciplinary teaching offer. • The Istituto di Studi Superiori (ISSUGE) encourages advanced educational paths of didactic and scientific excellences for worthy students selected by public contest. RESEARCH • Worldwide experts in all domains involving the sea: its habitat, its economy, its exploitation. • Tight connections with one of the biggest oncological research hospital in Europe. • Scientific and teaching synergies with the Istituto Nazionale di Fisica Nucleare (INFN) and the Consiglio Nazionale delle Ricerche (CNR). • Systematic collaborations and sharing of facilities and infrastructure with high-tech national and international companies (e.g. IIT). • UNESCO Chair “Anthropology of Health. Biosphere and Healing Systems” established in 2014 CAMPUS • The oldest Campus, site of the Social Sciences and Humanities Schools, descends from the heart of the baroque city down to the ancient harbour. • The Science and Engineering campus is located in the eastern part of the city, close to the fisherman village of Boccadasse