Karlsruhe Institute of Technology or Karlsruher Institut für Technologie (KIT) - public higher education institution in Germany. KIT began its academic activity in1825. The main building of the university proudly stands in Karlsruhe inside an urban campus.

University ranking. In Germany Karlsruhe Institute of Technology is at the top 10 universities. The university can boast a strong track record, ranking 10 in the national ranking of Germany. It ranks the highest in the following disciplines «Engineering and Technology», «Natural Science», «Social Sciences and Management», «Physics», «Chemistry». The university is famous for its high education quality ranking in the top 200 in the international rating. Thanks to its high educational standards the university graduates are quite popular among employers of Germany and the world.

Application process and the cost of tuition. The admission board requests both the certificate of previous academic performance and examination results. The competition is quite mild with a ratio of 1 to 3. The academic year is traditionally divided into semesters. A year of bachelor studies will cost you around 3,460 USD. KIT is considered to be a pricey option when it comes to obtaining a master’s degree - 3,460 USD per year of study. Despite the tuition gees being quite low, the students often participate in scholarship programs. On the official website of the university (http://www.kit.edu) you can read more about the programs and associated tuition fees.

Infrastructure of KIT. The university has its own library. The university is a part of the European University Association (EUA) in addition to being a member of the Conference of European Schools for Advanced Engineering Education and Research (CESAER), TU9 - German Institutes of Technology, CLUSTER.
UniPage Services Admissions assistance
Location on map 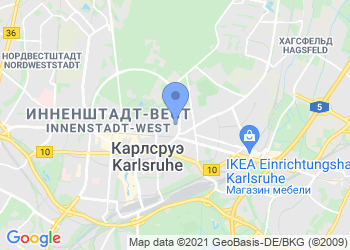 On October 01, 2009, the Karlsruhe Institute of Technology (KIT) was founded by a merger of Universität Karlsruhe (founded 1825) and Forschungszentrum Karlsruhe (founded 1956). KIT bundles the missions of both precursory institutions: A university of the state of Baden-Wuerttemberg with teaching and research tasks and a large-scale research institution of the Helmholtz Association conducting program-oriented provident research on behalf of the Federal Republic of Germany. Within these missions, KIT operates along three strategic fields of action: research, teaching, and innovation. Seven KIT-Centers pool the research activities, eleven KIT-departments stand for a research- and student oriented teaching and learning culture.