Polytechnic University of Madrid (UPM) - public higher education institution in Spain. UPM was officially founded in 1971. It has an urban campus located in Madrid.

Application process and the cost of tuition. The students must pass examinations in order to get admitted to the university. Polytechnic University of Madrid chose to divide its academic year into semesters.

Infrastructure of UPM. The university has a functioning library. On campus the students can use the sports facilities provided by the university. It is worth noting that in addition to being a part of the European University Association (EUA), the university also has a membership in the Conference of European Schools for Advanced Engineering Education and Research (CESAER) and OpenCourseWare Consortium (OCW).
Free consultation UniPage services
Location on map 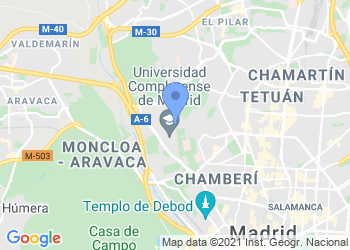 Although Politécnica de Madrid is a Young university, having been founded only in 1971, most of its Schools are over a hundred years old, dating back of the 18th and 19th centuries and existing independently until they were grouped together as Politécnica de Madrid. It is not an exaggeration to say that much of the history of Spanish technology for over one and half centuries was written by the Schools of Architecture and Engineering of this university, as for many years some of them were the only Technical Schools in existence in their fields in Spain. Almost all the leading Spanish educators and researchers have been involved with Politécnica de Madrid either as students, teachers or both. Three Schools were founded in the 18th century. The School of Architecture, the oldest, was founded in 1752. The Naval and Mining Engineering Schools were established in 1772 and 1777 respectively. The Civil Engineering School was the first School to be founded in the 19th century, in the year 1802. Almost half a century later the School of Industrial Engineering was started in 1850. This School today covers numerous additional fields such as Mechanical, Chemical, Electrical and Nuclear Engineering. The School of Agronomical...