The University of Texas at Dallas

The University of Texas at Dallas (UTD) - public higher education institution in United States. UTD began its work in the year 1969. The university has an urban campus in Richardson.

Application process and the cost of tuition. The certificate of prior academic performance along with exam results is required for submission by the admission committee. Throughout the admission period more than 79 percent of applicants successfully enroll to the university. Nevertheless, in UTD the ratio may vary dramatically depending on the study program. The academic year is traditionally divided into semesters. The cost of tuition for the bachelor’s programs is around 11,000 USD per year. A master’s degree of UTD will cost a student a significant sum of 11,000 USD per year. In addition, part of the cost can be covered by university scholarships. A wide range of online courses is available for the students of UTD. More information regarding tuition, admission and programs is available on the official website http://www.utdallas.edu.

The composition of the university. The University of Texas at Dallas is considered to be a large university, teaching more than 28,000 students. Being a foreign citizen does not exclude you from the admission process. It is worth mentioning that every 6 student of the university came from abroad. The education is conducted by 731 teachers and professors. The university is an active participant of international programs aimed at academic exchange of students between the educational institutions. University’s social media profiles can give you more information about the students and current events: Facebook, Linkedin.

Infrastructure of UTD. The students have access to the university’s library. Students can apply for a dormitory.
Despite the ongoing pandemic and current political agenda, admission to foreign universities will continue under normal conditions.
Free consultation UniPage services
Location on map 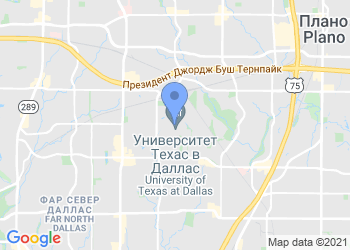 The University of Texas at Dallas - Official Description

UT Dallas' exceptional academics give parents a reason to smile. Many schools strive to become innovative, global leaders, but at UT Dallas, that's part of our tradition of being not-so-traditional. Established as a research center nearly four decades ago, UT Dallas has been dedicated to serving the Dallas/Ft. Worth region and state of Texas as an innovator. We are academically strong enough to attract Nobel laureates and top researchers to our faculty, flexible enough to offer programs that entice top students and, cutting edge enough to establish strong alliances with business and industry. Combined, these strengths puts us in a unique position to become one of the great universities of the world. Opened in 1969, UT Dallas has evolved into one of the best research institutions in Texas. With 133 degree programs, we offer an extended variety of interests for your student to pursue in a convenient local setting. The university attracts the brightest minds in science, math and engineering and boasts one of the top business schools in the state. And an ever-expanding breadth of degree programs and capital improvements to the campus promise to push UT Dallas to the fore of education excellence.