University of Bremen or Universität Bremen (UB) - public higher education institution in Germany. UB was officially founded in 1971. Thanks to its quite favourable location inside Bremen, students can enjoy an active city life with a rural serenity.

Application process and the cost of tuition. In order to enroll to the university the applicant must provide the results of the examinations and the certificate of the academic performance. University of Bremen is among the universities that divides the academic schedule into semesters. Studying bachelor’s at UB is relatively inexpensive - only 1,000 USD per year. When applying for master’s programs at UB a student should take into account that a year of studies will cost him/her around 1,000 USD. More information about tuition fees and admission requirements can be found on the official website of the university(http://www.uni-bremen.de).

The composition of the university. University of Bremen is average in terms of student capacity, teaching the maximum of 19 thousand students. Both citizens and foreigners are able to apply. Every 9 student is a foreign citizen. The academic staff includes more than 1900 teachers and professors. Foreign specialists are the majority of the academic staff. The university provides its students with the opportunity to participate in the international exchange programs. You can meet the students by following the university on social media: Twitter, Youtube, Facebook, Linkedin. 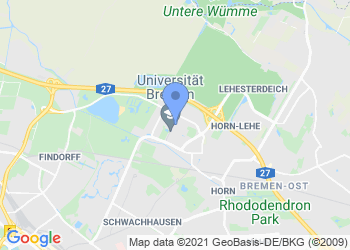 Description of University of Bremen

The University of Bremen is a mid-sized university with 250 professorships and 18,000 students, offering a broad range of disciplines with a large spectrum of subjects; 100 different study programs organized in 30 academic disciplines and producing internationally competitive top-level research. Just forty years after it was founded, the University of Bremen has risen to the top tier of German universities, ranking especially high in the volume of third-party funding for cutting-edge research. The University of Bremen was founded in 1971. In the course of its relatively short history it has developed into the science center of North West Germany. For many years now, the University of Bremen has been among the top league of German universities in the area of research. The University performed extremely well in the first two rounds of the Excellence Initiative supported by the German Ministry of Education and Research and the federal states, being awarded recognition for the excellence of three of its institutions: Two graduate schools (Bremen International Graduate School for Marine Sciences – Global Change in the Marine Realm; Bremen International Graduate School of Social Sciences) and a cluster of excellence (MARUM –The Ocean in the Earth System). Since November 2012 the University of Bremen has been awarded the coveted title “University of Excellence” in the third round of the Excellence Initiative. It is accompanied by the institutional Strategy “Ambitious and Agile”, which is a strategy for the development of the whole of the University. The nine measures it contains have been designed to enable the University to pursue its guiding principles and to strengthen the whole of the University. The underlying idea is to reinforce networking and strategic coordination between the high-profile areas and non-university research partners (strengthening the high-profile areas), to support new research ideas and creative groups in all subjects with suitable offers of funding (support for new ideas), to provide innovative young researchers with attractive career opportunities (promoting talent). The University’s Institutional Strategy has been successful in acquiring the funding needed to continue its work of profile building even more energetically, enabling it to become even more firmly established in the arena of top-notch international research and to strengthen the innovative capacity of the whole University. Ever since it was founded, the University of Bremen has purposefully pursued a policy of creating close links between its teaching and research activities. A good example is its approach to studying in projects (“Bremen Model“), which fosters elements of independent research-based learning oriented to societal issues. Today, this is underscored in a number of study elements, the strong orientation to interdisciplinary studies, and the University’s guiding principles. Various surveys, measures, and discussion processes illustrate and confirm that both teaching staff as well as students share a high level of willingness to participate in research-based learning: implementation is facilitated by this culture of internal consensus. Especially characteristic for its teaching profile is the University’s focus on research-based learning at an early stage of studies, the anchoring of a comprehensive program of General Studies in the curriculum, and the supportive integration of e-learning components. The young University of Bremen is always open to new developments. For example, within the context of support for young researchers, in 2001 it was the very first university in Germany to introduce a so-called competitive tenure track for "junior professors" (assistant professors), which became known as the “Bremen Perspective”. Research and finding solutions to pressing social issues has a long tradition at the University of Bremen. This encompasses both fundamental as well as applied research. The University meets its commitment to education and research in the interest of society by entering into close cooperation with public institutions and enterprise, as well as by offering a broad spectrum of services to the community. In order to facilitate cutting edge international research it relies on a home-made tradition of close internal networking across the faculties and with several excellent non-university institutions in the region. Moreover, it has always been essential to be open to innovative research ideas and to provide support for outstanding young researchers from the start. The university’s recent successes in the Excellence Initiative and the high rate of third-party funding it receives are both tangible evidence that it is on the right track. The university’s high flexibility, its concentration of resources, status-transcending flat hierarchies, and a pronounced propensity for cooperation will continue to serve the University in the achievement of its high ambitions. The University of Bremen has twelve faculties (Physics/Electrical Engineering, Biology/Chemistry, Mathematics/Computer Science, Production Engineering, Geosciences, Law, Business Studies/Economics, Social Sciences, Cultural Studies, Linguistic and Literary Studies, Human and Health Studies, Pedagogical and Educational Sciences). Yet, the university’s six high-profile areas cross faculty boundaries and are focused on interdisciplinary research: 1. Marine, Polar and Climate Research, 2. Social Change, Social Policy, and the State, 3. Materials Science and Production Engineering, 4. Computer, Cognition and Communication Sciences, 5. Logistics, 6. Epidemiology and Health Sciences. Through their outstanding research achievements these interdisciplinary high-profile areas shape how the university and its achievements are perceived. In addition, the university campus and the city-state of Bremen are home to ten very renowned non-university institutes being members of the Max Planck Society (MPG), the Helmholtz Association of National Research Centers (HGF), the Gottfried Wilhelm Leibniz Science Association (WGL) and the Fraunhofer Society (FhG).This offers international academics, researchers, scientists and other university- related professionals opportunities for engaging in research cooperation beyond the confines of the university