University of Alabama at Birmingham

University ranking. The university is in the top 5% according to international ratings.

Application process and the cost of tuition. Кроме результатов экзаменов для поступления в учебное заведение необходимо предоставить информацию о предыдущей успеваемости. Throughout the admission period more than 80 percent of applicants successfully enroll to the university. Nevertheless, in UAB the ratio may vary dramatically depending on the study program. Traditionally the academic year is divided into semesters like in many other universities of United States. Obtaining a bachelor’s at UAB is anything but cheap with tuition fees of 20,000 USD per year. UAB is considered to be a pricey option when it comes to obtaining a master’s degree - 20,000 USD per year of study. Despite this the students can apply for scholarships provided by the university. Is among the educational institutions that allow the students to enroll in online programs. On the university’s official website (http://www.uab.edu) you can find more accurate information on programs and tuition.

The composition of the university. University of Alabama at Birmingham is average in size with a capacity of 14 thousand students. Foreign citizens can also apply to the university. The university employs 2000 teachers and professors. UAB has exchange agreements with many educational institutions. You can follow the university on social media to learn more about its life: Flickr, Twitter, Youtube, Facebook, Linkedin.

Infrastructure of UAB. The university has a dedicated library. The campus dormitories that can be offered to the students upon request. The university is a part of the The University of Alabama System in addition to being a member of the Association of Public and Land-Grant Universities (APLU), Oak Ridge Associated Universities (ORAU), Sport affiliations and memberships National Collegiate Athletic Association (NCAA).
Free consultation UniPage services
Location on map 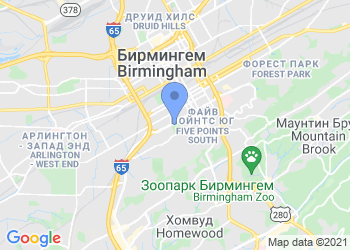 Description of University of Alabama at Birmingham

The UAB Vision: A world-renown research university and medical center - a first choice for education and health care. Ours is a remarkable and singular story in higher education. From our origins as a fledgling medical complex and modest “extension center” of the University of Alabama in the mid-20th century, UAB has evolved into one of the most dynamic and productive universities of the 21st century. In four short decades since becoming an autonomous campus in 1969, this institution has risen to global renown for our intensely collaborative research and patient care, our novel academic programs, and our robust culture of innovation. The remarkable story that began more than four decades ago continues daily all over our campus and throughout our community, propelled by the collaborative, pioneering spirit that is in the very DNA of this institution. We hope you will consider joining our students and faculty who are writing the next momentous chapter in that story, forging a brighter future for Birmingham, Alabama, and the nation, and discovering the knowledge that can truly change our world