University of Cincinnati (UC) - public higher education institution in United States. UC began its academic activity in1819. The university campus is of urban type and is located in the vicinity of Cincinnati.

Application process and the cost of tuition. The certificate of prior academic performance along with exam results is required for submission by the admission committee. The chances of successful admission are very high as 60 percent of applicants get enrolled but that number may vary depending on the faculty. The academic year is divided into semesters like in many other educational institutions of United States. The tuition fees are quite steep. A year of bachelor studies at UC will cost you at least 20,000 USD. Those who wish to get their master’s degree here should be ready to spend at least 20,000 USD per year. With that in mind the university provides remarkable students with scholarships and grants. UC is changing with the times and now offers online programs in addition to traditional full-time ones. For more information you can visit the official website of the university https://www.uc.edu.

The composition of the university. University of Cincinnati is classified as a large university with more than 28,000 concurrent students. Foreign citizens can also apply to the university. The ratio of foreign students at UC is 10% of all students. The teaching staff consists of more than 2800 specialists. A variety of international student exchange programs are available at UC. To learn more about the student life and current events, you can always follow the university on social media: Itunes, Twitter, Youtube, Facebook.

Infrastructure of UC. The university has a functioning library. For those who require accommodations dormitories on and off campus are offered.
Despite the ongoing pandemic and current political agenda, admission to foreign universities will continue under normal conditions.
Free consultation UniPage services
Location on map 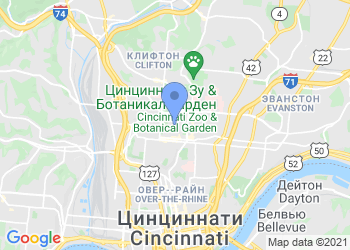 Description of University of Cincinnati

The University of Cincinnati, Ohio’s premier urban research university, has gained a reputation as the #HottestCollegeinAmerica, serving a diverse community of 42,000 students through a balance of educational excellence and real-world experience. Ranked by the National Science Foundation among the top 25 public research universities in the United States, UC boasts a faculty who have distinguished themselves worldwide for creative teaching and research. UC is the largest employer in the Cincinnati region, with an economic impact of more than $3 Billion. The University of Cincinnati is ranked among the Top Tier of the country's "Best National Universities" according to U.S. News. UC rose to 139th in the latest ranking – up from 156th in 2010. The 17-point move in two years puts UC's ranking at the same level as Arizona State, George Mason and Oregon State. UC has numerous programs ranked among the top 100 public universities in the nation. Of the UC programs that are nationally ranked, 34place in the top 50. The Chronicle of Higher Education calls UC a “research heavy weight.” Forbes magazine, Delta Sky and Travel+Liesure magazine have named UC one of the world’s most beautiful campuses. UC has been named a “green university” by Princeton Review, which also ranked UC among the top 20 universities in the nation for the diversity of the student population. G.I. Jobs lists UC among America’s “military-friendly” campuses for its efforts on behalf of veterans. In 2013, UC and its affiliates earned more than $400 million in grants and contracts. UC’s 2013 endowment of $1 Billion ranks 73rd in the United States among all colleges and universities, and 28th in the United States among public institutions. The University of Cincinnati earned an A+ from Intead, an international student marketing company that conducted a “secret shopper” test, posing as an international student seeking information to begin fall 2014studies. In this responsiveness test, which included universities from the United States, Canada and Australia, UC was rated No. 1 for its impressive response. In the International Student Barometer survey of 193 universities, UC ranked eighth in the world. The survey asks student opinion about their experiences in categories ranging from student learning to student life and social activities; support services (career advising, counseling, IT support); and experience on arrival (orientation services, registration). The University of Cincinnati leads the world in Cooperative Education, which for more than 100 years has provided students with the opportunity to alternate full-time terms of school and work to provide them with a solid base of experience and professional development. In recent years, UC launched the Academic Internship Program, which provides access to opportunities for part-time internships and the Center for Service Learning and Civic Engagement to supporting campus-community connections. Germany and Japan have been the traditional international co-op destinations since international co-op began as a formal offering in 1990, and those placements have held steady in recent years. However, recently, co-op placements in China have been increasing dramatically. China is now the second-largest international destination for UC co-op students. InFY13, UC began the Singapore Experience, allowing UC co-op and internship students to live and work in Singapore to gain experience in and exposure to Asia, home to 60 percent of the world’s population. The University of Cincinnati traces its origins to 1819when, due to the tireless energy of Daniel Drake – physician, scholar, teacher, and lecturer – the State of Ohio chartered both the Cincinnati College and the Medical College of Ohio. These pioneer institutions endure today as UC’s colleges of law and medicine. Despite ambitious beginnings, scarce funds and internal friction handicapped both institutions and they fell into inactivity. In 1835, the Cincinnati College was revived under President William Holmes McGuffey, author of the famous McGuffey Readers. Again, financial trouble and the effects of the Civil War prevented the institution from achieving success. Only the college’s Law School survived. In 1858, a wealthy merchant and landowner named Charles McMicken bequeathed his estate to Cincinnati for the creation of a municipal university. This gift provided the foundation of the University of Cincinnati, chartered in 1870 by the Ohio General Assembly. During the next century, a number of Cincinnati educational institutions were merged with the University of Cincinnati, including the colleges of medicine, law and pharmacy. Also merging were the esteemed College-Conservatory of Music, the Ohio Mechanics Institute, and the Cincinnati Observatory. Over the course of its first century, UC founded colleges of engineering, business, education, nursing, and art. The university has awarded graduate degrees since 1878. By the mid 1960s, it was apparent that the resources of the City of Cincinnati could not be stretched to accommodate the rapidly growing student body and an aging physical plant. The citizens of Cincinnati voted overwhelmingly to convert their university to full state status, and UC was named Ohio's 12th state university on July 1, 1977. The University of Cincinnati has established a continuing reputation for academic accomplishment and innovative ideas. Since its founding, UC has been the source of many contributions to society, including the oral polio vaccine, the first program of cooperative education, the first electronic organ, the first safe anti-knock gasoline, and the first antihistamine. Among the historic faculty or alumni of the University of Cincinnati are found President and later Chief Justice William Howard Taft; Albert Sabin, developer of the oral polio vaccine; Nobel Peace Prize winner and U.S. Vice President Charles G. Dawes; Pulitzer Prize-winning cartoonist Walt Handelsman; Doris Twitchell Allen, founder of Children's International Summer Village; Astronaut Neil Armstrong; soprano Kathleen Battle; Cleveland Abbe, whose work at UC led to the National Weather Service; Eula Bingham, environmental scientist and head of OSHA; Marilyn Gaston, assistant surgeon general; Broadway producer Kevin McCollum (“Rent”), author Thomas Berger (Little Big Man, Neighbors); prima ballerina Suzanne Farrell; sports greats Sandy Koufax, Oscar Robertson, Jack Twyman and Tony Trabert; architect Michael Graves; artists Tom Wesselmann and Gilbert Young; and Tony Award winner Faith Prince. The number of living alumni of the University is counted at 260,421.