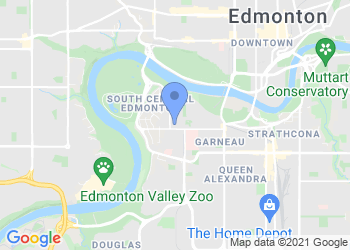 UniPage Services Admissions assistance
University of Alberta (U of A) - public higher education institution in Canada. The history of U of A can be traced back to1908 . It has an urban campus located in Edmonton.

University ranking. University of Alberta is one of the leaders in Canada, one of the 5 best universities in the country. University of Alberta is quite famous as it ranks high in the top 5% of the best universities of the world. It is renowned for the following programs: «Arts and Humanities», «Engineering and Technology», «Life Sciences and Medicine», «Natural Science», «Social Sciences and Management», «Mathematics», «Chemistry», «Computer Science», «Economics & Business». U of A is among the best in terms of education quality, proudly standing in the top 200 in the international rankings according to this criterion. International employers prefer the students from U of A as the university boasts very low graduate unemployment rates.

Application process and the cost of tuition. The admission process involves prior academic performance evaluation. University of Alberta divides its academic year into semesters. A year of bachelor studies will cost you around 18,190 USD. A master’s degree of U of A will cost a student a significant sum of 18,190 USD per year. With that in mind the university provides remarkable students with scholarships and grants. Due to the fact that the tuition fees at U of A may vary depending on the faculty, we advise you to check the official website http://www.ualberta.ca for more accurate information.

The University of Alberta is one of Canada’s top universities and among the world’s leading public research-intensive universities, with a reputation for excellence across the humanities, sciences, creative arts, business, engineering, and health sciences. Home to world-leading facilities such as Canada’s National Institute for Nanotechnology and the Li Ka Shing Institute of Virology, the U of A attracts the best and brightest minds from around the globe. Our students choose from 400 undergraduate, graduate, and professional programs in 18 faculties. We lead the country with the most 3M national teaching fellowships (Canada’s highest award for undergraduate teaching excellence). With over 100 years of history and 250,000 alumni, the U of A is known globally for equipping graduates with the knowledge and skills to be tomorrow’s leaders. The U of A is located in Edmonton, Alberta, a dynamic city with one million residents and the major hub for Alberta’s thriving energy industry. The main campus, in the centre of Edmonton, is minutes from downtown with bus and subway access through the city. Home to over 39,000 students, including more than 7,000 international students from 152 countries, the U of A fosters a supportive and multicultural atmosphere within a vibrant research environment.

Description of University of Alberta

The University of Alberta is one of Canada’s top teaching and research universities, with an international reputation for excellence across the humanities, sciences, creative arts, engineering, and health sciences. Home to more than 38,000 students and 15,000 faculty and staff, the university has an annual budget of more than $1.4 billion and attracts more than $498 million in external research funding. It offers close to 400 undergraduate, graduate and professional programs in 18 faculties on five campuses. Offering a wide array of programs and extra-curricular activities, the University of Alberta provides students with multiple opportunities to discover and explore their particular passions, talents, and skills. Located in Edmonton, Alberta, the U of A boasts the best university theatre program in Canada, the country’s second-largest library, a vibrant medical school and teaching hospital, a highly ranked business school, and programs in energy and environment that address today’s most pressing concerns. The U of A is also the only university in western Canada that offers French-language and bilingual bachelor degrees at its Campus Saint-Jean, while student looking for the small campus liberal arts, residential experience, can find it at the U of A’s Augustana Campus, about 95 kilometres south of Edmonton. Students study—and excel—under the leadership of many of Canada’s best teachers and world-class researchers, including 34 winners of the nation’s top award for undergraduate teaching. Since its founding in 1908, 64 U of A students have become Rhodes Scholars. U of A alumni have served the public at the highest levels as Governor General, Prime Minister, Premier, and Chief Justice of the Supreme Court of Canada. They have become leaders in major Canadian media corporations—from the CBC to the Globe and Mail. They have built global companies such as Stantec, PCL, Syncrude, Dofasco, EnCana and Giordano International, China’s largest retailer of casual clothing. Dedicated to the pursuit of truth for the “uplifting of the whole people,” U of A researchers have been at the forefront of research innovation for over a century. Examples of research breakthroughs include: Robert W Boyle’s invention of sonar during the First World War; James Collip’s refinement of insulin with the Nobel-prize winning team of Frederick Banting, Charles Best and John MacLeod; Karl Clark’s discovery of a method to separate bitumen from oil sands; Ray Rajotte’s Islet Transplantation Group’s development of the Edmonton Protocol for the treatment of Type 1 diabetes; and Lorne Tyrrell’s discovery of the world's first oral antiviral therapy for chronic hepatitis B. Whether it's partnering with NASA to measure the wind on Mars, doing world-renowned research on water ecology that has saved thousands of lakes around the world, producing the first full scholarly history of women's writing in the British Isles, or making breakthroughs in obesity or cardiac research, the U of A is leading the way. At the University of Alberta, we seek to be a place where individuals can become extraordinary leaders, transformed by world-class research and learning that advances knowledge, solves problems, and enriches human experience. Our vision is to inspire the human spirit through outstanding achievements in learning, discovery, and citizenship in a creative community, building one of the world’s great universities for the public good
Universities related to University of Alberta
Universities in this city
Information is exploratory. For accurate information, refer to the official website of the school.
Advanced search
Showing 1-5 of 6 items.
Universities in this country
Information is exploratory. For accurate information, refer to the official website of the school.
Advanced search
Showing 1-5 of 352 items.