University of Granada or Universitas Granatensis (UGR) - public higher education institution in Spain. UGR began its activity in 1531. The university campus is of urban type and is located in the vicinity of Granada.

University ranking. Studying at University of Granada, one of the top 10 universities of Spain is, undeniably, a dream for many students. University of Granada is among the oldest and the most prestigious universities of Spain. The university is in the top 5% of the most prestigious educational institutions on the planet. It is famous for its education quality in the following disciplines: «Arts and Humanities», «Life Sciences and Medicine», «Natural Science», «Social Sciences and Management», «Mathematics», «Computer Science». The university is in the top 300 in education quality.

Application process and the cost of tuition. In addition to the results of the examinations the applicant must submit a certificate of the previous academic performance. The academic year consists of two semesters. UGR has affordable bachelor’s programs that cost less than 1,000 USD/year. A year of master’s studies will cost you 1,000 USD. Despite the tuition gees being quite low, the students often participate in scholarship programs. UGR is one of the universities that offers online education. When planning your education, please, consult the official website of the university https://www.ugr.es.

The composition of the university. University of Granada is a big educational institution, attended by more than 50 thousand students. Foreign citizens can submit their applications along with the local students. Among the students every 9 is a foreigner. The academic staff includes more than 2700 teachers and professors. UGR has exchange agreements with many educational institutions. You can follow the university on social media to learn more about its life: Twitter, Youtube, Facebook, Linkedin.

Infrastructure of UGR. The university has a functioning library.
Despite the ongoing pandemic and current political agenda, admission to foreign universities will continue under normal conditions.
Free consultation UniPage services
Location on map 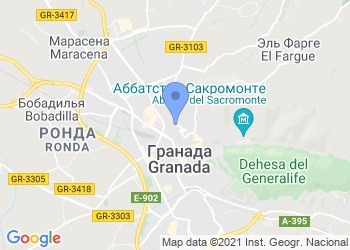 The possibility of the discovery of a new world was emerging even before the conquest of Granada. The city had already been Iberian, Roman and later Jewish and Islamic before the coming together of American and European cultures. The capital of the former Nazarí Kingdom, Granada was the last city in the Iberian Peninsula to be ceded by the Muslims in 1492, an event that resulted in the formation of Spain. The Christian conquest did not taint the city´s brilliance as a cultural center, and sciences and the arts found the best way to develop. The University of Granada was founded in 1531 by Emperor Charles V through a papal bull by Clement VII. In this way, Granada affirmed its status as a university city open to culture, people and beliefs. The institution of Granada continued the tradition of the Arab university of Yusuf I (Madraza, 14th century). With 470 years of tradition, the University of Granada has been the witness of history, from the time of its influence in the social and cultural surroundings of the city up to its development into an intellectual and cultural nucleus in the south of Spain, a period of nearly five centuries. At...

Description of University of Granada

The Universidad de Granada, founded in 1531, continues a long teaching tradition, the roots of which can be traced back to the madrasahs of the last Nasrid Kingdom. The University is a vibrant presence in the city of Granada, benefiting from the distinctive beauty of its environment and a privileged geographical location due to its proximity to the Sierra Nevada, an excellent ski resort and the Mediterranean coast, with several major tourist sites, including Motril, Almuñécar and Salobreña. In Granada, there are four University Campuses, as well as the “Campus Centro”, in which all the centres spread throughout the historic part of the city are brought together. The UGR's policy of using buildings of historical and cultural value has enriched its heritage, as well as promoting the restoration and maintenance of these buildings. In addition to this emphasis on more traditional elements, the Health Science Technological Park, which is still being developed, demonstrates our strong commitment to innovation by promoting interaction with technological bio-health companies and favouring high-quality healthcare and biomedical knowledge. There are two other UGR Campuses in the cities of Ceuta and Melilla, in Northern Africa. Over 60,000 undergraduate and postgraduate students study at the UGR, with another 20,000 students taking additional courses, language courses, summer courses etc. The University employs 3650 lecturers and over 2000 administration, technical and maintenance staff. At present, courses for 66 different qualifications are taught in the 28 teaching centres of the UGR. The courses are taught across 123 departments. The Postgraduate School offers 83 master's courses, 58 doctorate programmes and 130 additional courses. The commitment to high-quality research has placed the Universidad de Granada in a prominent position in terms of national rankings. The importance of the presence of international students is most clearly demonstrated by the 606 mobility agreements signed with European Higher Education institutions and the ERASMUS mobility programmes; the UGR is the leading European university in terms of receiving students and the second Spanish university in terms of the mobility of its own students. The University is also involved in major exchange programmes with universities in the whole world

Free consultation Why choose UniPage
Universities related to University of Granada
Universities in this country
Information is exploratory. For accurate information, refer to the official website of the school.
Advanced search
Showing 1-5 of 334 items.